Running a chemo house for a child- Kristina Smith

Living in and running your house and home when you are looking after a child on chemo. Top tips on what to do, useful products and where to buy them, and how easy it is once you get over the initial shock of diagnosis and discharge from hospital.

Intro: Oliver was diagnosed with multi system Langerhans Cell Histiocytosis when he was 20 months old, back in 2014.

The LCH had attacked Oliver’s bone, skin and gut and he started chemotherapy and had a port-a-cath fitted at Addenbrookes Hospital. Oliver had 3 different chemotherapy courses, trying different ones but the LCH was still very active and spread to his eye sockets.
In 2015 he started a clinical drug trial at Great Ormond Street Hospital, which targets the B-RAF gene in which Oliver was found to have a mutation.

Oliver is still on these medications 4 years later and we are not sure what the long-term plan is. 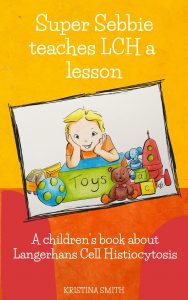 Intro:
In May 2015, my beautiful little boy was diagnosed with a very rare cancer like condition called LCH Langerhans’s Cell Histiocytosis. He was two and a half.

He had lost two kilos in two months. His left eye was partially closed from a skull tumour. His scalp was a bloody mess. His skin was covered in spots. His ears were oozing with infection. He had an insatiable thirst to the point of drinking rain water from the trampoline. He had lost his wonderful zest for life.

After almost two years of repeated GP visits, seeing dermatology and ENT at the hospital and advice from all quarters we finally got diagnosed on Northbrook Ward in Winchester hospital.

Only 50 kids a year get this wicked illness in the UK. Nobody knows why, or how. It’s so rarely seen that its diagnosis is often missed by doctors for some time.

Within three days, our little Sebbie had been through hell. He’d had cannulas, scans, prodding and poking, general anaesthetic, a central line fitted in his chest, and was away from his home and new baby brother. We were transferred to the excellent Piam Brown paediatric oncology ward at Southampton Hospital. Sebbie was put on chemo immediately.

Sebbie’s chemo was meant to last 12 months, but his LCH kept returning, so it was extended to 18 months, including 3 sets of ‘intensive’ sessions lasting 6 weeks, which were hell.

Sebbie’s pituitary gland has been damaged for life so he has to take tablets three times a day every day to stop his body weeing to death. His skull tumours have all disappeared. His skin now looks amazing. He now has his old mop of blonde hair back. We visit Northbrook Ward in Winchester every 3 weeks for chemo with the wonderful Dr Ian Rodd. Every three sessions we return to Piam Brown for the excellent Dr Ramya to check on progress.

Sadly, in November 2016, we finally had our ‘end of treatment’ consultation booked at PB. Excited, but apprehensive, we never expected the news we received. They have now found a ‘flare’ on his cerebellum (brain) consistent with the even rarer Neurodegenerative LCH (ND-LCH).

Our luck has just got a whole lot worse. There is no known treatment for ND-LCH, and trials on drugs are limited due to the incredibly small number of sufferers across the world, and the unknown long term effects of the treatments that have been trialled. Sebbie is now undergoing 3 monthly neurology testing (the ‘Ataxia test’), with psychological testing tbc, to pinpoint the first signs of neurodegeneration. This is likely to ultimately end with severe physical and learning disability.

When that inevitable day happens, we will need to make a decision, cloaked in uncertainty, on what treatment option we take. He has now been referred to Great Ormond Street Hospital in London to the national expert in ND-LCH, and is undergoing BRAF gene mutation testing. 50 per cent of LCH patients have mutations to their BRAF gene which can be treated with mutation inhibitors, although the long term effects are unknown, and they are not thought to have any effect on the ND-LCH, just any reactivation of his LCH. Our other option now is even stronger chemotherapy.

So that’s our story. My child happens to be that one in a million. Luckily My Sebbie is SO incredibly brave. He still doesn’t know he’s ill. He gets frustrated that he cant go to soft play or playgroup, go for a swim or dig for mud in the garden, but his immunity is low and his central line has to be protected.

In April 2016, I shared an abseil with five other Mummies from Sebbie’s preschool, Rainbows Playgroup. They have been amazing. They are a parent led preschool that runs in the local church. They’ve recently been awarded outstanding by Ofsted. Rainbows keep Sebbie feeling ‘normal’, beavering in the background to give him separate sand play, water play and snacks; being trained by the community nurse on dealing with any emergency; and being really supportive throughout.

Hopefully Sebbie will recover. There are many more children around the World that are being diagnosed with LCH. All with similar stories I’m sure. So please give generously to fund more research, and particularly ND-LCH. LCH doesn’t have the public’s awareness, or support, like other childhood cancers but it can be just as devastating.

By raising awareness of histiocytosis in the national and local press we can reach more people. We rely on personal stories to help us engage readers around our cause and bring our stories to life.

If you are interested in sharing your story on our website or in a magazine, newspaper or on TV please send a 100-word summary of your story along with your name, contact details and a recent photo to Histio@histiouk.org. We regret that we are unable to respond to everyone, but we really appreciate you getting in touch.

Why should I share my story?
We want to help as many people as possible during their histiocytosis experience – patients, carers, families and communities. By raising awareness of what we do in national newspapers, magazines, on TV and in the local press we can reach more people.

We rely on personal stories to help us do this as they engage the reader and bring the story to life. For example, if we provide research for a newspaper showing that histiocytosis can affect people financially it has more of an impact if it’s accompanied by an emotive quote or story of someone who has been directly affected and helped by us.

Your story can encourage those who see it to get help if they are worried they have the symptoms of histiocytosis or may inspire them to donate or fundraise for us. Some people who have shared their story find it a cathartic experience. It makes them feel good to give something back.

Where would my story appear?
As well as our website, we work with a range of media from broadcasters like the BBC, national newspapers like The Times, Daily Mail and Guardian and women’s magazines like Woman’s Own and Good Housekeeping.

They all have different requirements for their stories so we would approach those which we think are most appropriate, depending on your story.

Do I have to be identified/pictured?
Yes, all of the magazines and newspaper ask that the people they interview are pictured. Some ask you to send/email them photos to use while others send a photographer to take photos.

Will I have a say over what’s written?
By sending us your story you agree to its publication on our website or on or in any publication that may collect news feeds or create editorial content.

Request by journalist for contact details will be agreed with you in advance of disclosure.

Please be aware that whilst some journalists offer to read your story before it goes to print to check facts it depends on the publication and this cannot be guaranteed.

What happens next?
The journalist will try tell you when your story will appear so you can get a copy and tell all your friends. We ask the journalists to include information about Histiocytosis UK Support’s campaigns and services and you can feel proud that you’ve helped deliver our message.

If you are interested in sharing your story in a magazine, newspaper or on TV please send a 100-word summary of your story along with your name, contact details and a recent photo to Histio@histiouk.org. We regret that we are unable to respond to everyone, but we really appreciate you getting in touch.

The views expressed are those of the writer and participants and do not reflect views and or opinions of the charity any products mentioned are available from a variety of retailers.